Nightclub Security is at the venue to protect the nightclubs owner, the premises, employees and customers, as well as to prevent any criminal activity within the club, and to immediately notify the police of any wrongdoing. If one of the employees is having an issue with a customer, you always side with the employee. If the nightclub has a Head Door Supervisor, he or she is the one who decides who gets into the club. We provide Nightclub Security in Warrington, Manchester, Liverpool, Merseyside, Cheshire, Greater Manchester, North Wales and North West England.

Door Supervisors are ordinarily responsible for keeping law and order at nightclubs, bars, lounges, entertainment venues, events, clubs, arenas, and casinos. While day time door security is in demand at all times at most places, nightclub security normally work at night and in some cases covering weekend days.

People go to nightclubs to enjoy themselves. They want to have a few drinks, party with old friends, meet new people, and have a good time. Lots of people and alcohol is a recipe for trouble, and that’s why it’s important to have a high quality security staff. A good crew will track and resolve any potential problems, without a single spilled drink.

The role of a main entrance Door Supervisors is to allow customers in who are properly dressed. In the case of an event whose names are found on the list provided by club management. The guest list consists of the names of people who are “friends of the club”. Or have tickets if it is an event.

Historically, bouncers have had the role of no-nonsense hard men. But as times changed, so did the role of bouncers. In the late 20th century the role of bouncers transitioned to one of conflict resolution through communication and limited physical force. The title of a Door Supervisor can earn great respect, and has been regarded as an honoured and important position.

Despite being commonly perceived as massive, unintelligent guys, good Door Supervisors are excellent communicators who earn the respect of their guests. A good Nightclub Door Supervisor is one who can remind a guest of the house rules without twisting any arms. You must be confident in order to avoid being provoked by angry guests, and you must always remain professional and firm. A good judge of character can predict a guest’s behaviour, before any problems arise.

Nightclub Security work is known for lots of standing, movement, and the occasional physical altercation. You should be fit, but keep in mind that an employer may hesitate to hire someone that is too thin.

It’s important to be firm and assertive so that you can control guests without the need for physical aggression. You must earn the respect of your guests, and the best way to do that is to be courteous and reasonable. Conflict resolution training could prove to be invaluable in refining these skills. 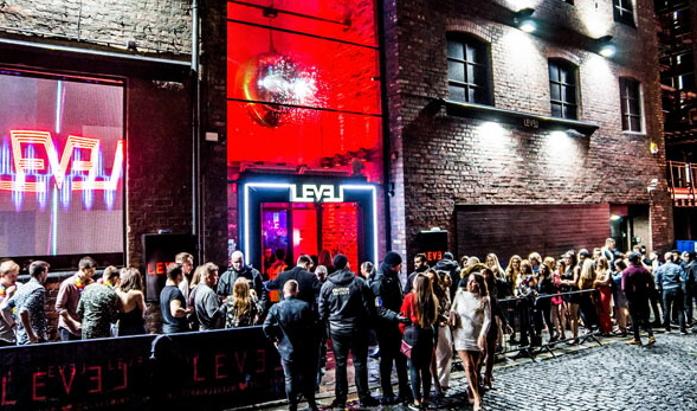 Nightclub Door supervisors are used mainly by the licensing trade in pubs, bars, entertainment venues, nightclubs and late night establishments. However, it is not unheard of for restaurants, hotels, take away food establishments and even taxi ranks to use Door Supervisors.
Nightclub Door Supervisors have to adhere to the industry's extensive training and vetting procedures before being able to apply for a Security Industry Authority (SIA) license. Spartan 24 Hour Security ensures that all door Supervisors work in accordance with BS7960:2005 for Door Supervisors. All our staff are vetted & screened in accordance to BS7858:2006, and provide the best Nightclub Security in Warrington, Manchester, Liverpool, and North West England.
All Nightclub Door Supervisors must by law be trained and licensed before they can work. Door supervision work is now a recognised career with qualifications recognised by Skills for Security, City and Guilds and the British Institute of Innkeepers.
Spartan Event Security Door Supervisors are trained to meet both our own standards and also the requirements of the Security Industry Authority.
Copyright Spartan 24 Hour Security 2017